Auditions for ‘The Anniversary’ by Bill MacIlwraith, directed by Stephen Beggs

Update: Please book an audition place by emailing info@southbankplayhouse.com with your name and the night you wish to attend.

We will also be asking those attending auditions to confirm that they have taken a lateral flow test and that it is negative before coming to auditions.

3 Men and 3 Women of varying ages

Mrs. Taggart’s husband, a successful building contractor, has been dead for ten years. Joining her for the traditional annual celebration of her wedding anniversary are her three sons, Henry, Terry and Tom. Terry is planning to emigrate to Canada with his wife Karen and their five children; Tom arrives with his pregnant girlfriend Shirley in tow; and Henry is hiding a secret. Throughout the day and evening, the domineering matriarch does everything in her power to remind her children who controls the family finances and ultimately their futures.

South Bank is available for hire for rehearsals and workshops but not for events or performances. Please make an enquiry by clicking the button below.

Southbank Players have been operating in the current premises since 1999. Before that we were two separate but closely linked groups - Trident and Osborne Players - both long standing companies with a wide range of experience and an interest in producing challenging drama of a high quality. We've made a list of our previous productions available.

Southbank Playhouse is on Kimberly Drive, just off Sunnyside Street/Ormeau Road. Our building was originally a scout hall and over the past fifteen years we've made a number of improvements to the premises, including the installation oflighting and sound systems, central heating, retractable seating bank, and a refurbished kitchen. 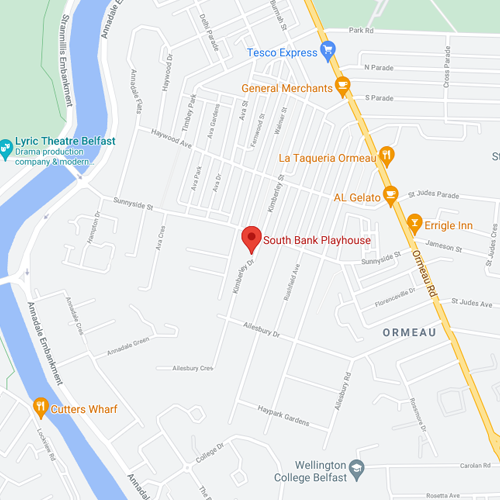